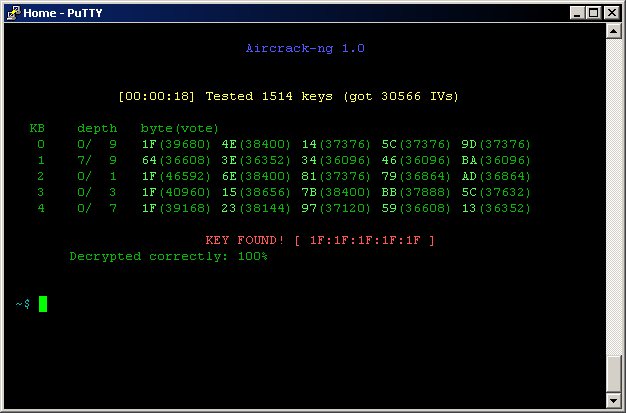 Aircrack-ng is an 802.11a/b/g WEP/WPA cracking program that can recover a 40-bit, 104-bit, 256-bit or 512-bit WEP key once enough encrypted packets have been gathered. Also it can attack WPA1/2 networks with some advanced methods or simply by brute force.

It implements the standard FMS attack along with some optimizations, thus making the attack much faster compared to other WEP cracking tools. It can also fully use a multiprocessor system to its full power in order to speed up the cracking process.

aircrack-ng is a fork of aircrack, as that project has been stopped by the upstream maintainer.

Yet another mint (or linux in general) program that just doest work !!! Yes i could spend the next 100 hours debugging, fixing, working around, trying to get help from the most easily offended, or... just not bother!

This is really good. Excellent program to learn Ethical hacking

give me a tutorial please

I've worked with this toolset for a few years now. Absolutely love it. Only thing I would recommend is an external wifi adapter so you don't have to nuke the network manager to use it.

Usefull tool , with more practice it is grat.

Don't know how to us it? Not working, not installing on my Linux mint 10

Very good for penetration testing for some networks

I tryed to ibnstall on mint. I can't found the program in the menu and by seirch tools..

-Why is Linux better then Windows?...Anybody has this question now?