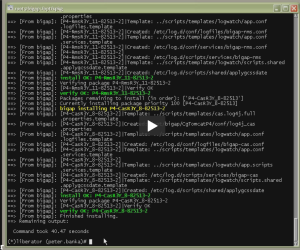 This game is the same as the old Blitz16 game on Commodore 16/Plus 4, written by Simon Taylor.

The player is driving a plane that moves across the screen. When the plane reaches the right edge of the screen it starts again on the left side, but drops down one line. Below is a cityscape composed of blocks. The player has to drop bombs from the plane, and each bomb which hits a building removes some blocks. As the plane descends it risks hitting any remaining blocks so priority has to be given to bombing the tallest buildings. The level is completed when all blocks are removed and the plane has descended safely to the bottom of the screen.

Info about the original Blitz 16: http://plus4world.powweb.com/software/Blitz_16

Does not work. Not in the menu or terminal.

I think that just maybe it's time to clean out old software from the repository.