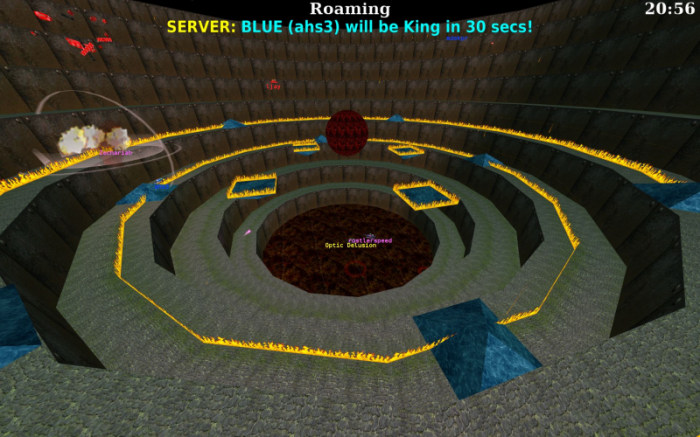 BZFlag is a 3D multi-player multiplatform tank battle game that allows users to play against each other in a network environment. There are five teams: red, green, blue, purple and rogue (rogue tanks are black). Destroying a player on another team scores a win, while being destroyed or destroying a teammate scores a loss. Rogues have no teammates (not even other rogues), so they cannot shoot teammates and they do not have a team score.

There are two main styles of play: capture-the-flag and free-for-all. In capture-the-flag, each team (except rogues) has a team base and each team with at least one player has a team flag. The object is to capture an enemy team's flag by bringing it to your team's base. This destroys every player on the captured team, subtracts one from that team's score, and adds one to your team's score. In free-for-all, there are no team flags or team bases. The object is simply to get as high a score as possible.

This metapackage installs both the client and the server, as well as generic documentation files concerning the bzflag community, contributing to bzflag, etc.

Works fine; controllers are a bit hard to get used too.

Didn't work for me either. I really wanted to play this.

Awesome Game! Wonderful community!! Everyone should give it a try!

This is a classic for me! The graphics sucks but and the gameplay is simplistic but the overall is 5/5 for the fun!!!