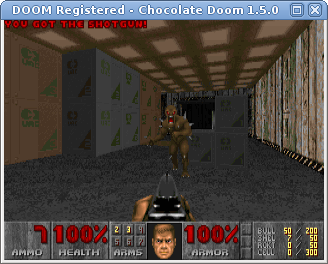 Chocolate Doom aims to accurately reproduce the original DOS version of Doom and other games based on the Doom engine in a form that can be run on modern computers. Unlike most modern Doom engines, Chocolate Doom is not derived from the Boom source port and does not inherit its features (or bugs).

Chocolate Doom supports all flavors of Doom, including The Ultimate Doom, Doom 2 and Final Doom as well as Chex(R) Quest, HACX and FreeDM.

All Chocolate game engines require game data to play. For Chocolate Doom, free game data is available in the freedm package. Commercial game data for all four engines can be packaged using "game-data-packager".

Was a huge Doom fan back in the day. Installed this plus freedm, like it says. Weapons all over the place, no monsters to shoot. No keys to open doors. Played for 5 minutes, then uninstalled. Graphics are crap.

Works great, perfectly compatible with all versions of DOOM, DOOM2 and Chex Quest. Definitely a must have for Doom fans running Linux and can't use other source ports due to hardware limitations

This is exactly how I remember it. Even today, not much comes close to Doom. Absolutely brilliant!