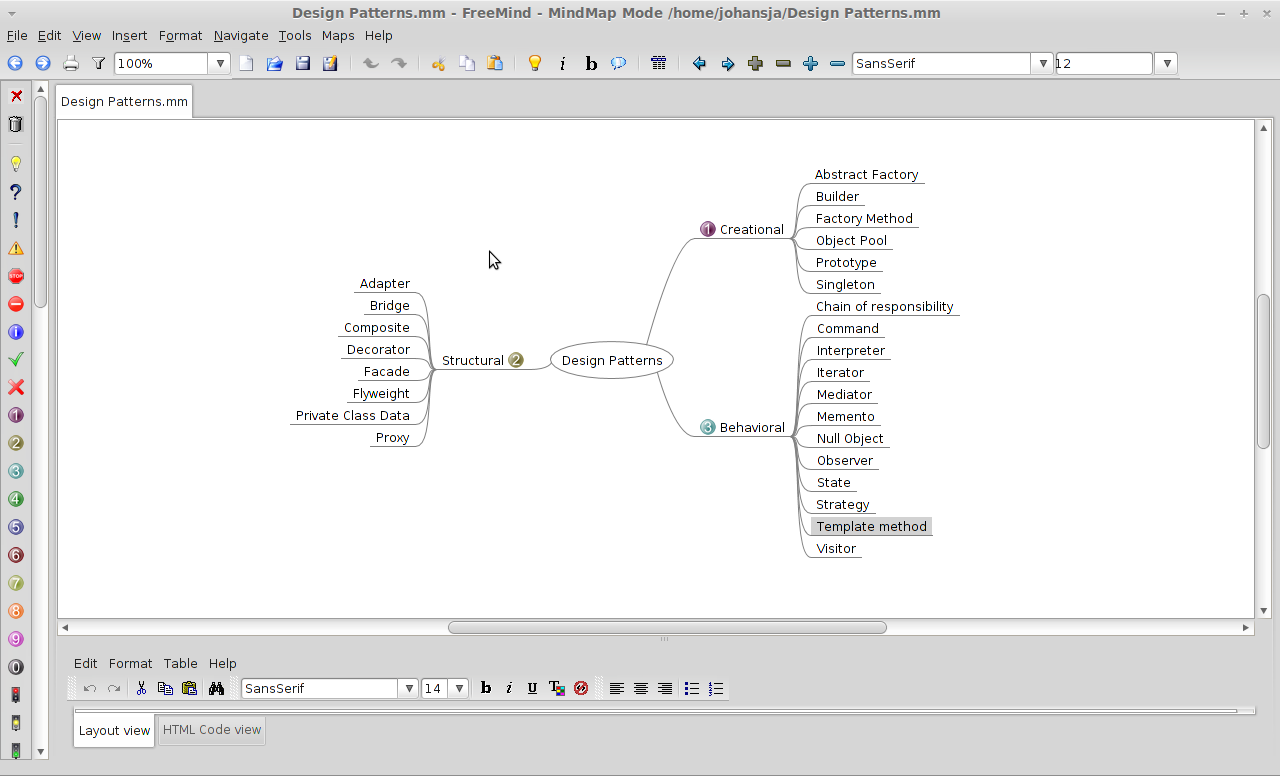 Taking the concept-mapping approach to human-computer interface design. a mind mapper, and at the same time an easy-to-operate hierarchical editor with strong emphasis on folding. these two are not really two different things, just two different descriptions of a single application. often used for knowledge and content management.

freemind doesn't work with classpath based java implementations. use openjdk (or sun's java), and check freemind(1) for more information.

I use it every day. It has helped me organize my thoughts and communicate with other people.

Got an idea? MindMap it. Got a plan? MindMap it. Planning a trip? MindMap it. Best planning tool around. Easy to use easy to read. Used it in the past in Windows. Brilliant.

The simplest way to organize my ideas. Simple GUI, very simple to use. Ottimo consigliatisissimo

First about the cloud sync suggestion below: Please, do add WebDAV support as option, and I mean anyone who codes cloud sync/upload support to their apps. WebDAV is a standard that can be installed on any web server with right language support, like Apache with PHP and ownCloud (which has WebDAV subsystem). Some of us don't like, trust or otherwise don't want to use 3rd party clouds, especially when having to use several depending on which ones does which app support - and when you've setup ownCloud or other WebDAV system, it's frustrating that to see that the only real standardized cloud system is not supported. *2ndly: I'd love to fork this, or port this to perl, and make it modular to have user-interface plugins, defaulting on what's used (GTK?) and providing at least a terminal (text-mode, TUI if you will - for a perl port I could make to run even on DOS with ANSI-drivers, pdcurses and perl Curses modules). This would provide functionality on terminal (wether emulator or real VT100, or such, terminal wired to serial port - did the equivalent with 286, DOS & Commo and null-modem cable between it and my linux system), Linux console and of course remote use via ssh (or telnet, but I'd expect it only inside trusted LAN/Intranet), allowing remote connecting, for example to your home 'puter with ssh server to use the app you run with GUI at home on remote system using text UI. And, yes, that type line-graphics can easily be used with extended-ascii, vt100 or utf-8 line-graphics characters :) If I ever got this done, I would add also GUI module using Tk-library - it's being lightweight and not depending on more bloated libraries (on lower end machines [oldest: P75 w/ 16Mb RAM, but even X server available - single-driver build of X, such as XVesa, a generic lightweight build of X] I only build GTK or Qt libraries if I feel need for software which can't be compiled without GTK support. Any software is compiled optimized for size [gcc -Os], except when CPU is bigger bottleneck full [-O3], or if it makes it so much larger to make issue - think 16MB's and slow 750MB HD to use for swap partition] - maybe -O2. And CPU, ie. on P200MMX compiling for Pentium, but unlike on P75, with MMX extensions). This P75 would likely run in X if using Tk, but GTK would at least slow it, and for multitasking it's even more important to avoid any but most lightweight UI/Widget library. Just some ideas that came to me when I started to like this program - I'd want to be able to use it remotely *without* ssh + X-forwarding or port-forwarding and vnc remote desktop, etc. And cross TUI/GUI library supporting curses + aalib/cacalib/my-raster-character-based lib (Using 16 [16/8 on real textmodes, where default is 8 bg colors], 88 RGB (4x4x4) + 8 grayscale [rxvt] or 216 RGB (6x6x6) + 16 grayscales [xterm]), the library uses 3 levels of dither (25%,50%,75%) characters to increase R,G&B range from 6 to 21, not to mention 61, not 16, grayscales [on VT100 only one dither, 50%, so only from 6 to 11], but enough of my library. Sorry for some off-topic, but maybe they at least give someone else ideas :)

Easy to use and reliable! One of the few programs I use that are stable no matter the linux distro & desktop version. Use it with confidence!

Mindmapping is awesome and I'm grateful for the program. Consider recovery capabilities please.

Great and free solution for drawing your mindmaps

Best mind mapper for Linux, a must have tool for every meeting.