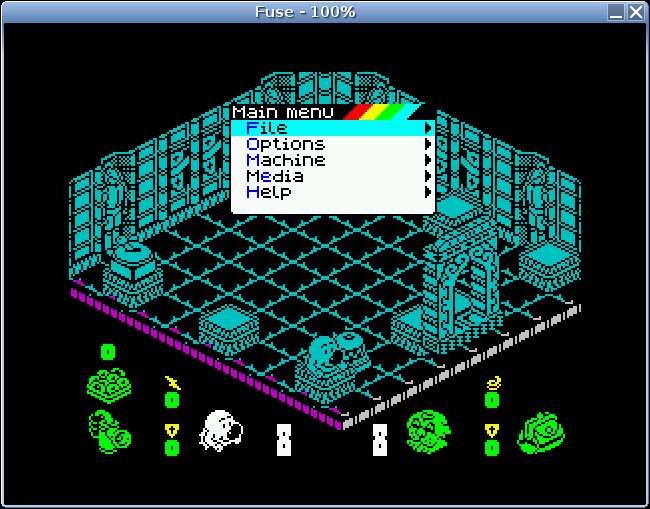 Fuse is a Sinclair ZX Spectrum emulator. It supports several models (including 16K/48K/128K/+2/+2A/+3 and some clones), with quite faithful emulation of the display and sound.

Its features include:
* Accurate Spectrum 16K/48K/128K/+2/+2A/+3 emulation.
* Working Spectrum +3e and SE, Timex TC2048, TC2068 and TS2068,
Pentagon 128, "512" (Pentagon 128 with extra memory) and 1024 and
Scorpion ZS 256 emulation.
* Runs at true Speccy speed on any computer you're likely to try it
on.
* It can load Z80, SZX and SNA snapshots, TAP and TZX virtual-tape
files (including accelerated loading), MDR microdrive images and
DSK floppy disk images, among many others.
* Sound.
* Built-in debugger.
* Emulation of most of the common joysticks used on the Spectrum
(including Kempston, Sinclair and Cursor joysticks).
* Emulation of some of the printers you could attach to a Spectrum.
* Support for the RZX input recording file format, including
rollback and 'competition mode'.
* Recording of movies to FMF files.
* Emulation of the Currah ÂµSource, DivIDE, DivMMC, Interface 1,
Kempston mouse, Multiface One/128/3, Spectrum +3e, ZXATASP, ZXCF
and ZXMMC interfaces.
* Emulation of the Covox, Fuller audio box, Melodik and SpecDrum
audio interfaces.
* Emulation of the Beta 128, +D, Didaktik 80/40, DISCiPLE and Opus
Discovery disk interfaces.
* Emulation of the Spectranet and SpeccyBoot network interfaces.
* Support for the Recreated ZX Spectrum Bluetooth keyboard.
This package provides binaries for the SDL version of Fuse.