Emulator for the Atari ST, STE, TT, and Falcon computers 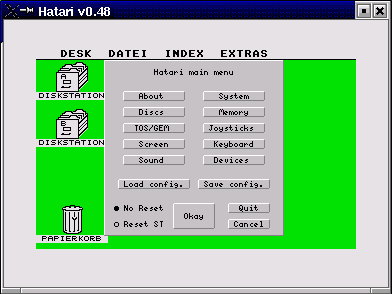 Hatari is an emulator for the Atari ST line of computers.

The Atari ST was a 16/32 bit computer system which was first released by Atari in 1985. Using the Motorola 68000 CPU, it was a very popular computer having quite a lot of CPU power at that time.

Unlike many other Atari ST emulators which try to give you a good environment for running GEM applications, Hatari tries to emulate the hardware of a ST as close as possible so that it is able to run most of the old ST games and demos.