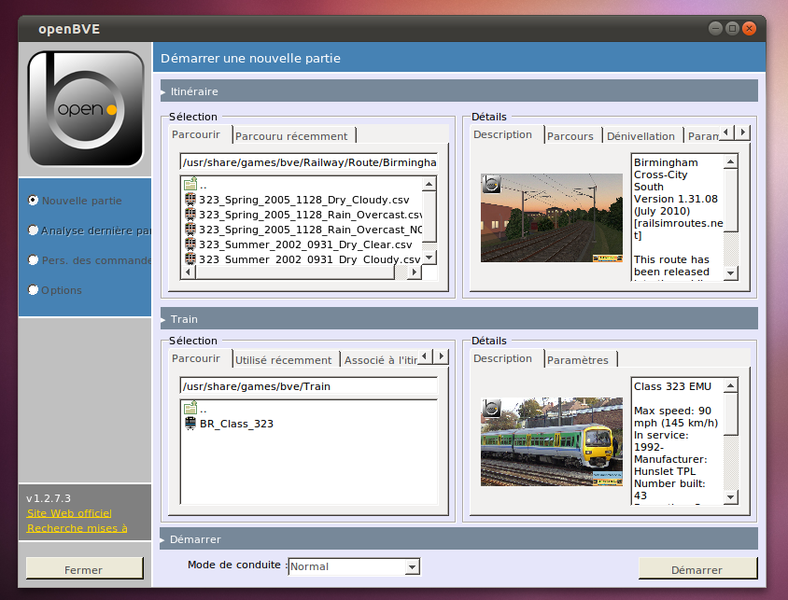 Technically, the simulator handles detailed per-car simulation of the brake systems, friction, air resistance, toppling and more. In trains supplied with 3D cabs, the driving experience is augmented with forces that shake the driver's simulated body upon acceleration and braking, as well as through curves.

Compared to other rail-based simulators, OpenBVE has its main focus on realism---not necessarily on user-friendliness. There may be a need to study operational manuals for the routes and trains chosen, rather than merely memorising a few keystrokes.

The simulator is designed to be backwards-compatible with existing 'BVE Trainsim' routes and cab interiors, allowing a wide range of existing scenarios to be loaded by a single-program (BVE1, BVE2, BVE4 and extended OpenBVE route formats).

OpenBVE uses OpenGL for 3D graphics rendering, OpenAL for positional surround sound, and is written in the C# language. Note that binary train extension plugins are not currently supported on Linux/Unix, because these would require Win32 emulation.

Quality program, has brought me hours of enjoyment so far and will bring many more. There are lots of add-ons availible for this simulator. Wish this repository has the most recent version, which works well on lm16 petra.

Very nice that this one is ported to Linux. BVE rocks!