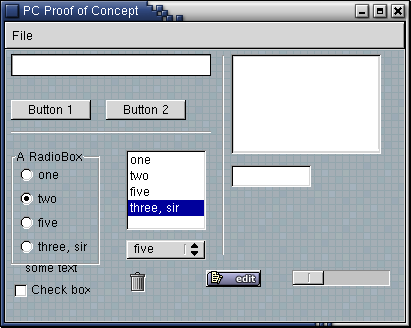 PythonCard is a GUI construction framework for building cross-platform desktop applications on Windows, Mac OS X, and Linux, using the Python language. It is based on the wxPython bindings for the wxWidgets toolkit (formerly known as wxWindows).

This is a meta-package which is intended to be used by developers who want the entire upstream distribution available to them. Maintainers of other packages that rely on PythonCard functionality should consider depending on one or more of the related packages (python-pythoncard, pythoncard-tools) as needed instead of this meta-package.

Great toolkit for developing easy python GUIs. Simple things are easy, and complicated things are possible, even if you have to drop down to the wxWidgets layer to accomplish them.