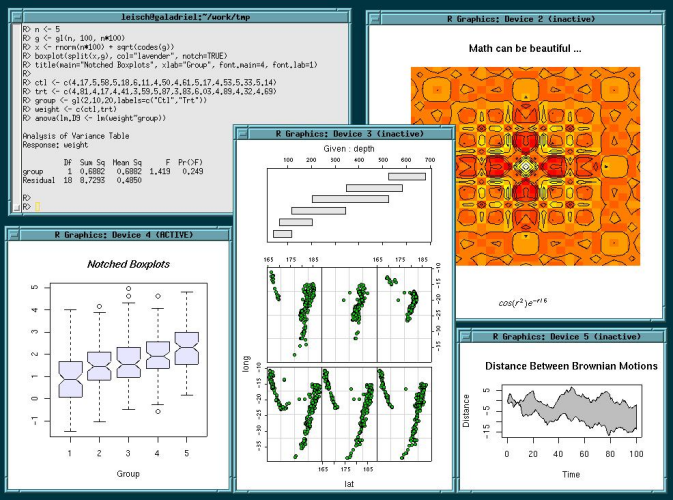 R is a system for statistical computation and graphics. it consists of a language plus a run-time environment with graphics, a debugger, access to certain system functions, and the ability to run programs stored in script files.

the design of r has been heavily influenced by two existing languages: becker, chambers & wilks' s and sussman's scheme. whereas the resulting language is very similar in appearance to s, the underlying implementation and semantics are derived from scheme.

the core of r is an interpreted computer language which allows branching and looping as well as modular programming using functions. most of the user-visible functions in r are written in r. it is possible for the user to interface to procedures written in the c, c++, or fortran languages for efficiency, and many of r's core functions do so. the r distribution contains functionality for a large number of statistical procedures and underlying applied math computations. there is also a large set of functions which provide a flexible graphical environment for creating various kinds of data presentations.

I wanted to use R Studio and therfore needed R but this version was out of date for the packages i needed to install. I went to the CRAN website, https://cran.rstudio.com/, and followed the instructions to install for linux, this gave me the latest version and i was able to install the R packages i needed in R Studio.

Excellent software. It would be nice to have the latest version, though that can be fixed by going to the R website.