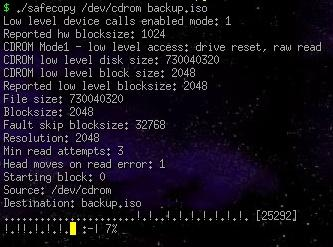 Safecopy tries to get as much data from SOURCE as possible, even resorting to device specific low level operations if applicable. This is achieved by identifying problematic or damaged areas, skipping over them and continuing reading afterwards. The corresponding area in the destination file is either skipped (on initial creation that means padded with zeros) or deliberately filled with a recognizable pattern to later find affected files on a corrupted device. The work is similar to ddrescue, generating an image of the original media. This media can be floppy disks, harddisk partitions, CDs, DVDs, tape devices, where other tools like dd would fail due to I/O errors.

Safecopy uses an incremental algorithm to identify the exact beginning and end of bad areas, allowing the user to trade minimum accesses to bad areas for thorough data resurrection.

Multiple passes over the same file are possible, to first retrieve as much data from a device as possible with minimum harm, and then trying to retrieve some of the remaining data with increasingly aggressive read attempts.

Safecopy includes a low level I/O layer to read CDROM disks in raw mode, and issue device resets and other helpful low level operations on a number of other device classes.

Safecopy is useful in forensics investigations and disaster recovery.

MUST BE RUN FROM CLI. DO not launch from the store, or look for an application menu.

Worked perfectly recovering files on DVD in RAW. Went to Disk Image Mounter and the files were recovered and intact.

I used this to recover a home movie from a damaged DVD.

great tool! i've been albe recover photos and oggs from damaged hdd on my old laptop