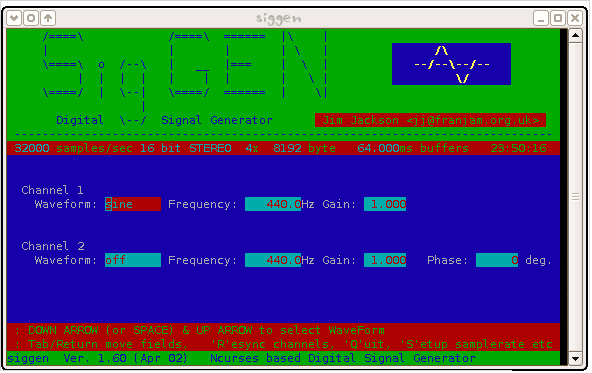 A set of tools for imitating a laboratory Signal Generator, generating audio signals out of Linux's /dev/dsp audio device. There is support for mono and/or stereo and 8 or 16 bit samples. The tools include:

* soundinfo: display some of the programming capabilities of the sound system support for the mixer device /dev/mixer and the DSP device. Also shows some of the ioctl calls in action.

* signalgen: a command line signal generator where details are specified from the command line for generating sine, cos, square, triangle, sawtooth, pulse, noise waves. Frequency, sample rate, relative amplitude etc. can be specified through command line options. The signal is played continuously until the program is stopped. There are options to save the basic raw digital samples raw to file or to a WAVE format file.

* swgen: a command line sweep generator. Both the sweeping and swept waveforms can be specified, along with the sweeping frequency and the swept frequency range. Otherwise similar to sgen above.

* siggen: an Ncurses screen based Signal Generator for two separate channels. On stereo audio cards the two channels are played on separate outputs. On mono cards the two channels are digitally mixed onto the one output. Type of waveform, frequency, amplitude, sample rate etc are specified/changed via a screen menu. It plays continuously. Changes to parameters take effect nearly immediately.

* sweepgen: an Ncurses screen based Sweep generator (see swgen and siggen above).

* tones: a command line program to generate several successive tones of varying frequency, and optional differing waveforms, durations and intensities. The sequence of tones can be either played once, or repetitively or the samples can be written to a file in raw or WAV format. This could make the basis of an auto-dialer for tone phones.

* smix: a simple command line program for getting and setting the mixer settings.

Doesn't appear to work. No instructions and the URL is not operational. Would love to use this as a quick tool for my test bench, but can't seem to get it to work.