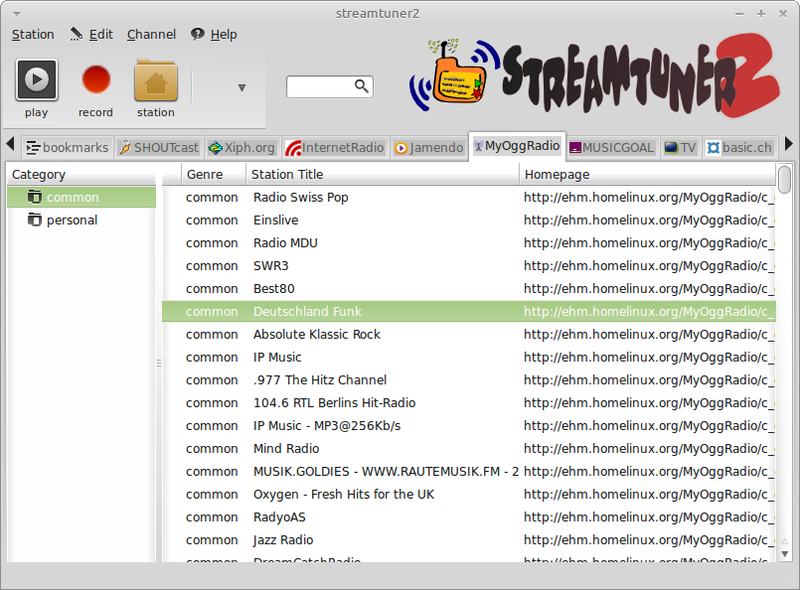 Streamtuner2 is a browser for radio station directories. It can fetch lists from SHOUTcast, Xiph.org, Live365, Jamendo, DMOZ, basic.ch, Punkcast. And it lists stream entries by category or genre. It reuses existing audio players, and recording is delegated to streamripper.

It mimics the original streamtuner 0.99.99, but is easier to extend because it's written entirely in Python. It's already in a stable and useable form.

Streamtuner2 based on Streamripper. So I install first Streamripper and then Streamtuner2. Recording did not work first. Then find solution at gizmeo.eu/streamtuner-2-revived-fehlerbehebung/ by adding -u 'uio' and -d recordpath at recording. Best thanks to c1ph4 :-)

Amazing! The best for listening to Shoutcast in Linux. Important: it's necessary to update to the last version from SourceForge to make it work. You just need to download the update, uncompress and replace the folders and files in /usr/share/streamtuner2/

No sound. even with audacious.

No sound. Even with audacious.

It works fine! You need a player to use this software. I use audacious and vlc.

You need also audio player to get this work like Audacious!

nice view of huge radio stagions list but no sound.