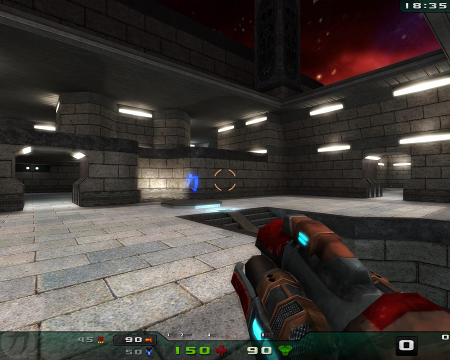 Nexuiz Classic is a fast-paced 3D deathmatch game with high-end and complex graphics effects. It is intended to be played over the Internet or over a local network. Several different game types, such as classic deathmatch, team deathmatch and capture the flag are available. It also supports a single-player mode and playing against the computer.

The game brings deathmatch back to the basics, with perfect weapon balancing and fast paced action, keeping itself away from the current trend of realistic shooters.

This package installs the client to play the game.

This game was originally released as "Nexuiz", but is now referred to as "Nexuiz Classic" since the Nexuiz name was re-used for a non-free game for consoles.

This game is so cool. It plays great. It is an old game........ doesn't have the magic graphics, but then, you do not need to have a super gaming computer to run it. If you like a FPS, you have to try this one. Be sure to play on the servers. I like the Akimbo servers...

It a awesome game, easy to run on a older laptop like the one I am using. Its a Dell Laditude E6410 with 4gb of ram and a i3 M370 CPU. Runs like a charm in windowed mode at medium settings... The game kind of reminds me of HALO, which is one of my favorite games ever!!!

It could have been better no. Not very creative

Our Teenagers prefer this over Call of Duty: Black Ops III. Best Shooter we've seen yet on a Linux Platform hands down.

Love it and fun

This is a great game. Unfortunately it just freezes up after a certain level. Perhaps I don't have enough ram, but all of the other levels work fine. The on-line mode is not working most of the time.