Disables a PPA and reverts to official packages 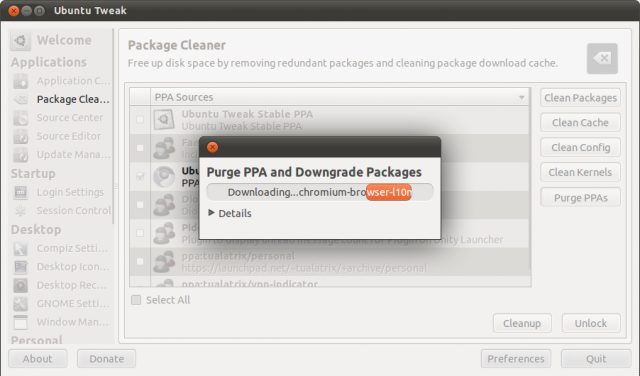 This program disables a PPA from your Software Sources and reverts your system back to the official Ubuntu packages. You can use this to return your system to normal after testing a new version from a PPA.

I highly recommend this tool for disabling annoying PPAs that keep re-enabling themselves and which you cannot get rid of otherwise! This is command line only, but even if that scares you, please take the time to type in those few letters and press enter; if you've gotten yourself in the same kind of mess that I had, it's totally worth it! My story: Shortly after having installed Mint 17 for the first time ever, I had some problems I thought was gpu driver related; so I played around with "intel-graphics-installer" (from Intel's own website 01.org, it is *not* in the official repositories, and that is how it should be, nuff said!) - I since learned that the problem was not related to gpu or driver, but I was utterly unable to get rid of the PPA. Finally the command line "sudo ppa-purge -s download.01.org ppa:gfx/ubuntu" did the trick for me. I would have given it a 5 star review if only it had had a list (GUI or CLI) that would let you pick from what external repos you have enabled. As it is you need a bit of skill to (1) identify the culprit, and (2) figure out what exactly you should type at the command line.