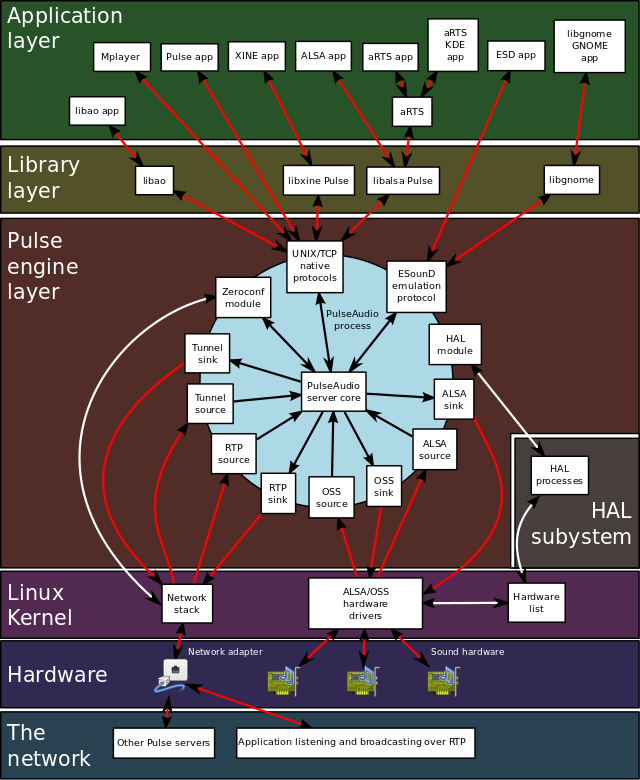 PulseAudio, previously known as Polypaudio, is a sound server for POSIX and WIN32 systems. It is a drop in replacement for the ESD sound server with much better latency, mixing/re-sampling quality and overall architecture.

These are some of PulseAudio's features:

* High quality software mixing of multiple audio streams with support for more than one sink/source. May be used to combine multiple sound cards into one (with sample rate adjustment).

* Network transparency, allowing an application to play back or record audio on a different machine than the one it is running on.

* Extensible plug-in architecture with plug-ins for jackd, multicast-rtp lirc and avahi, just to name a few.

This package contains the daemon and basic module set.

MINT 19.3: While not perfect, I've come to configure it so it work flawlessly for medias thru browser, VLC, recording mic, piano wav, piano midi, loopback to sing, etc.

Unusual to see pulseaudio consuming less than 20% cpu even when there is nothing active on the computer.

Coming back to Linux after 5 years or so and I can see that PulseAudio is still the number one cause of issues for me. Mumble is eating up CPU like crazy with it, VLC has no audio today, the default player has no audio either.

Pulseaudio 8.0 Compiled with lib 6.0 - very nice system for LINUX ... I am very fond of its development. I use combine sink to 2 sound card in the whole OS

Lots of features (I like features), but audio crashes and/or it delivers white noise instead of mic input at random intervals. But when (and as long) as it works, it does a good job of delivering low latency audio. Doesn't seem like a 100% mature package though. Note: Take care that you install modules that match your version of Mint (MATE contra Cinnamon), or else you could be installing yourself into a cesspool of trouble...

i removed pulseAUdio and it fixed all my sound problems

It just bugs out way too often, requiring a reinstall. It surprises me something that buggy was allowed in a final version of any OS.

It works perfectly: vlc, youtube, even some older games running under wine.

This is the reason why multimedia in Linux is not as good as it should be. This thing is still as buggy as hell after several years, and nobody has bothered to fix it.

PA speeds my audio up system-wide every few minutes, making me go into the terminal and kill it CONSTANTLY. It's been this way for years on multiple machines, so it's not like it's a new bug. The only reason this thing is in use is because nobody wants to write an alternative.

Its cool if you wanna watch the video without music. :PPP

Loathe it or ignore it. You can't like it.

Uninstalling this solved the problem with VLC losing sound after pausing.

I dont need it.

no problems (skype, mumble, ...) since deinstallation