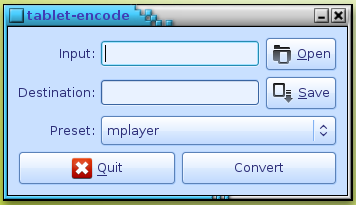 Tablet-encode can help with all these problems:
* It guarantees the output to be playable on a Nokia Internet Tablet using
a system of "profiles".
* It can rip and encode DVDs in a single step (dependent on mencoder version).
* It has a simple GUI interface for easily converting videos.
* It has a command-line interface so it can be easily scripted to
interface to your PVR (for example, MythTV, Freevo or VDR).
* Presets allow tradeoff between space/quality to be decided on a
per-video basis.
* Can optimise video size for the Internet Tablet's 15:9 screen.
* Handles anamorphic video sources such as widescreen DVDs.
* Output works with either the built-in Media Player, or mplayer.
* GUI and command line modes.