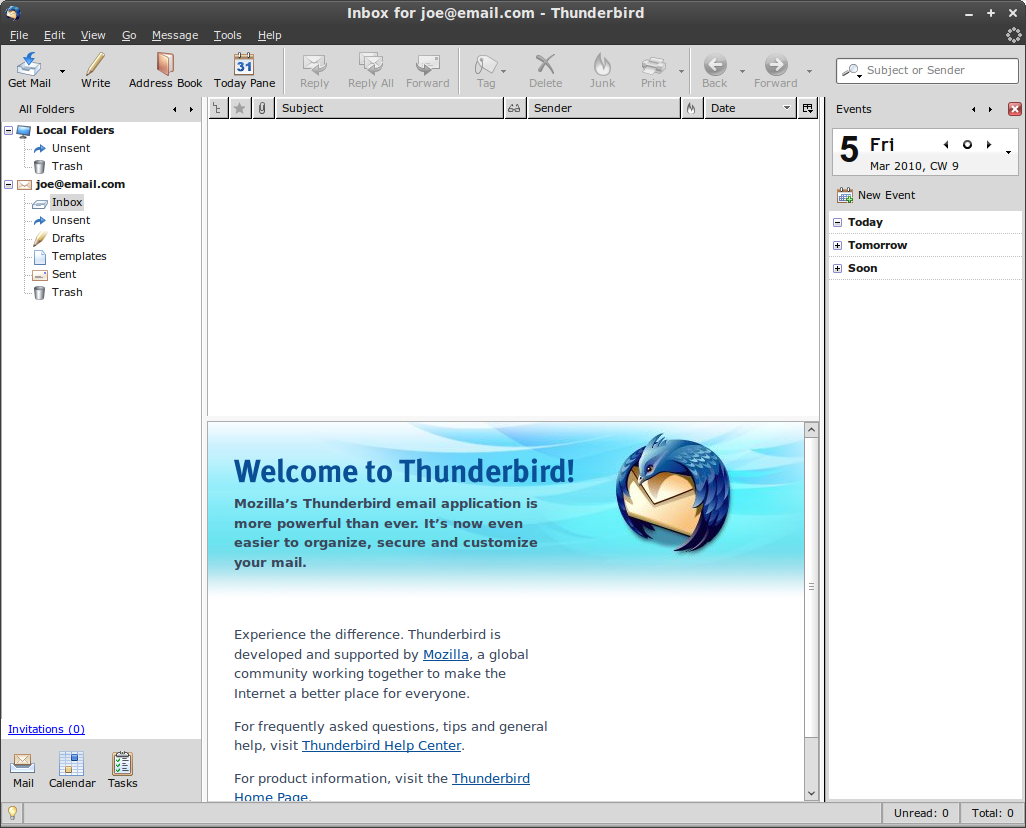 No email client comes even close to Thunderbird features and (mainly) stability.

I have been using this for so many years I remember just how long its been. Since the late 80's or early 90's at least! It's one of the first programs I install on new builds!

Thunderbird is working fine on Linux Mint. But lately (in the last 2 months ish - May though July 2022) it's not being updated and I don't know why. Some serious security related bugs were fixed back at the end fo May and the lastest version in the repo is still 91.9.1. Should be 91.10.0. UPDATE: Version was just updated to 91.11.0 today. Great, thanks!

This is an old version and does not support 2A (2 step auth). Unable to get it to work with outlook and Ive not tried it yet but im guessing with gmail with 2A as well. Please update to the newest version that supports 2A.

My machine stalls beause of Bluetooth, not Thunderbird. Used systemctl disable and all is well. But I find Evolution easier to use than Thudnerbird, and I don't need all the extra features. Linux Mint Cinnamon on a mac mini

Very capable and stable software. But the features are overwhelming for me.

What about update to Version 91.x ?

I've used one from the Linux Mint or Debian source and not one from the Flathub so It's slow on the update side but, I'm ready to sacrifice that for reliability and stability.

Get back to basics! T-bird is not google friendly, google does not like T-bird or any intergration to non-google, so quite trying! Be T-bird, a Stand Alone email client. My review - Overly complicated, functions are poorly coordinated, calendar's google intergration misses 1/2 functionalty. I used Thunderbird but the last several versions have become progressively disfunctional, poorly intergrated and just plain glitched. Change for change sake - Useablity be damned. Uninstalled

Good mail client but it needs an update.

Been using Tbird for donkeys years, wholly concur about v78, sticking with v68 at least for now. Just wish a few annoying little bugs could be squashed. Particularly the one where it apparently ignores, or fails to recognise UTF-8 definitions in emails. Just discovered that each folder has individual properties, where you can set the fallback encoding for messages in that folder. Not found any way to globally set all folders, going to be a pain going through my 100+ collection...

To the reviewer complaining about Tbird version 68.10 being "10 versions behind" -- it is understandable to think that, given the way Mozilla has been behaving, but in fact there has only been one official Tbird release since 68.10 and it is called 78.7 -- just recently released and, yes, making it look like there have been 10 versions since 68.10. That's an old Microsoft trick. The 78.7 version is available here as a Flatpack -- but BE AWARE: Mozilla has made *major* changes to Tbird with ver. 78.7 and I do not like a lot of them. Particularly them messing up the way Profiles work. So you might want to check out ver 78.7 in a separate machine and see if you like it. Besides the screw-up with Profiles, try writing a message with version 78.7 and after the "auto-save to draft" timer kicks in, see if you enjoy having a bright, flashing blue light streaking constantly back and forth across the screen while you're trying to concentrate on writing something. Irritating, distracting and a classic example of unecessary animation where it is definitely not needed or wanted. And no, I couldn't figure out how to turn it off. I'm sticking with ver. 68.01 for now. I've tried a lot of email apps but have been using Tbird productively for 15 years with no problems. It's been one of the very best and it is cross-platform with Linux-Mac-Windows(gag). Or, at least it was -- until they messed with the Profiles. I've always been happy to update to the lastest release of Thunderbird -- until I tried the new conceptual disaster of version 78.7. Mozillia appears to be trying to turn Thunderbird into Firefox and does not seem to care what they break while they do it. I may have to look at another option and find a way to covert my 15 years of Tbird email archive files into it. Oh, joy.

This version is 10 major releases old - Package maintainers - Pull your socks up, please??? How can I get support for it if it's already been superceeded by 10 NEW VERSIONS?!?!?!? UNFIXED BUGS, SO I AM UNINSTALLING AND NOT USING THIS ANCIENT PACKAGE ANY MORE.