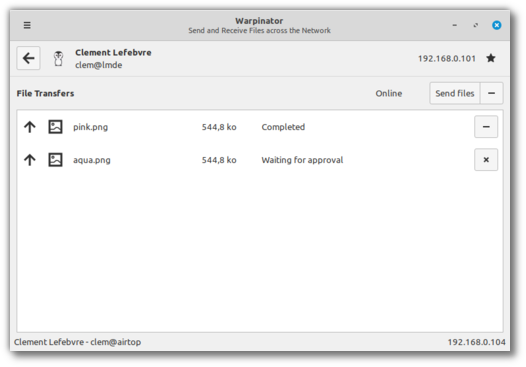 This is truly an "awesome!" app! It simplifies networking for thoes of us with little knowledge of the subject. This laptop and 2 desktops instantly found one another on my home network without any help from me.

Very convenient tool, fast and offering wireless file transfer without uploading anything on the web. Just one small bug: trying to upload a big music folder from my Mintbox to my Android phone, I got an error as it tried to upload an mp3 file beginning with a # (which is part of the title), then the whole process was interrupted and I had to start the whole thing again. After removing the # from the file name, it worked.

I liked Warpinator the first time I used it. It ran for a few days then refused to co-operate all of a sudden. Now it's unstable. Some mornings it works, others it just won't budge. Tried everything - port changes, firewall rules blah blah, no good. I wanted to make this a crucial part of my computer lab's intranet file sharing but the problem is that it only works on the first install (if it feels like it) and then when you try to boot up the machines the next day, "No other computers found..." There seems to be an issue that the developers need to fix regarding network interfaces. Devices on the same network using different connection methods (some on ethernet, some on wi-fi) fail to detect each other or if they happen do so, they appear to be offline. Desktops on ethernet "sometimes" detect and willingly connect to laptops on wi-fi. Please fix this issue.

Very useful for moving files from a computer to another one connected to the same network, without the need of USB keys or external drives. Great app!

I've been wishing for something like this for a LONG time, it works great, even on really large video files, and it can do multiple transfers in one batch. Computer to computer or computer to phone, nice work team :)