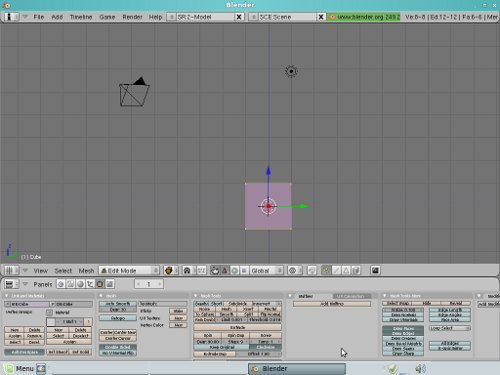 Blender is an integrated 3d suite for modelling, animation, rendering, post-production, interactive creation and playback (games). Blender has its own particular user interface, which is implemented entirely in OpenGL and designed with speed in mind. Python bindings are available for scripting; import/export features for popular file formats like 3D Studio and Wavefront Obj are implemented as scripts by the community. Stills, animations, models for games or other third party engines and interactive content in the form of a standalone binary are common products of Blender use.

My most used software, could do with updating more often on here, Also, is there a way I can submit a new screenshot, the current one is from the 1990s.

This needs to be updated cause this version wont work or should say open blender files that are 3.0 and higher versions.

there is the lastest version on the snap store,not sure if it works but i am gonna try it

this is SOO far behind the CURRENT version it's not even CLOSE to being funny... Why, for the LOVE OF DOG can the 'software manager' be updated more frequently?!??

Seems that the repo version is like a year old. Get it elsewhere. Other than that, Blender is awesome. But you knew that already, right?

Great software isnt gonna get any better then this for "free" although tuff for beginners it takes a little time getting use too but worth it.

Now that Blender is going to an LTS (Long Term Support) model, I would love to see the channel move to the 2.83.x release. The 2.82.x in the channel is still great and it supports most of the new features. Love me some Blender!

If you're looking for blender 2.80+ I think the last time I got it from installing steam on linux then installing blender from steam which gave me 2.8

The best 3D modeling software out there, rivalling industry-standard programs like Zbrush and 3DS max. It's also free and open source, how cool is that? That being said, the version here is quite outdated (2.79 feels like a different program altogether), the 2.8+ versions are way more polished. Go to their website for the newest one.

I love it . you can do just about anyhing with it. You can create simulations, games, Models, even fancy 3D logos. Blender has changed a lot since thise screenshot was taken. It needs to be Updated to Blender 2.82 now.

The version in here was 2.793b while on the blender website it was already 2.81a.

(I was scared because the example screenshot is from a really old version) Can't believe is in Linux too! and easy to install, I quickly tested it and it seems faster than the previous OS (W7 64Bits, same laptop)

i use this for editing videos. Creating and texturing mesh objects and then animating the objects. Blender is Awesome.