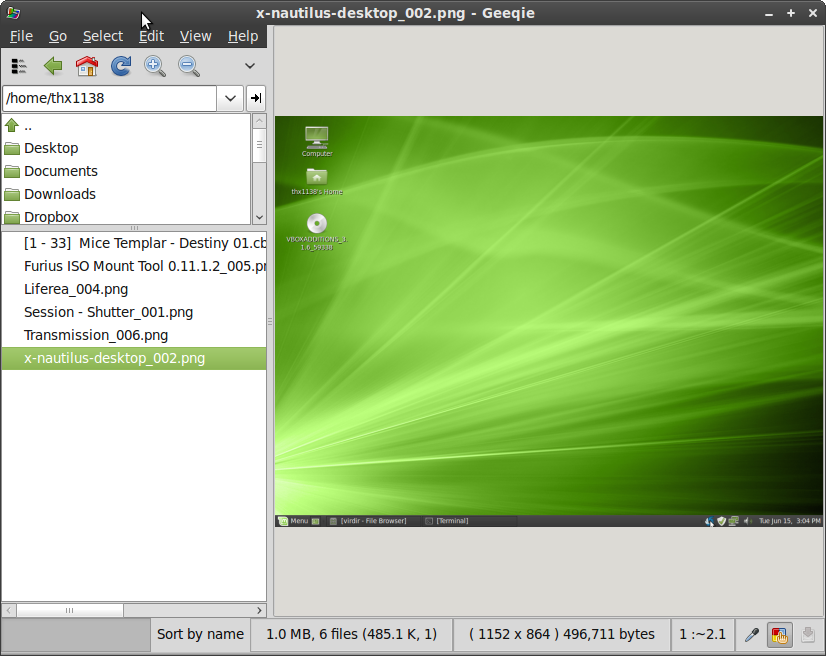 This is an amazingly utilitarian image viewer. It's fast, straightforward, reliable, and common actions are a single keystrone. You can add your own menu options (the app calls them "plug-ins") to open images in other applications, apply shell scripts, etc.

I was using AcdSee on the windowses since 1998 or so, and it always did it for me. Simple and powerful. After finally switching to Linux, I was looking for something like that, and Geeqie was it - the three panel display, simple zooming, simple switch to fullscreen and back, simple file operation (copy-move-symlink). A few small things, however, bug me. I often need to have the full path of the current image on the clipboard, to paste in a different app (a situation where drag'n'drop doesn't work). There are two plugins for this, and neither works, the clipboard remains untouched. Creating my own plugin also doesn't work, citing some exotic errors - why does it have to be in .desktop files, can't it be any executable? Another minor thing is that when an image is rotated, it writes the rotation info in, it seems, wrong fields in EXIF - so half of other software accepts the change and displays the rotated image correctly, half doesn't. The eog (Eye of Gnome) doesn't have this problem (but has others).

This is my go-to image viewer. Now it displays animated GIFs so it's even better! I don't know if it's good for orgaizing images or anything but it works great for one handed operation.

I've been looking for some time for a tool to read SRW file (RAW files from Samsung NX Cameras) and this works beautifully fast. Nice!

works like a charm. I was looking for something to display a random slideshow.

Not good as thumbnail viewer and sorter: you can't see thumbs all at once. Always 3-pane view, you can reassign what will be shown, but you can't make simple 2 pane view: directory tree on the left and all thumbs on the right. Back to GwenView.

Fast, simple to use... recommended

so far the best and simplest image viewer. fast and customizable!

The best ever used. No wait in loading raw file and super lightweight viewer

By far the best image viewer I have ever used. Configurable, great shortcuts, great slideshow and full-screen modes. Fork of gqview.

Extremely fast and lightweight, easy to use: just turn the mouse wheel and the next photo is there. Also, integrates some extra features too: analytic exif information, pan view, etc