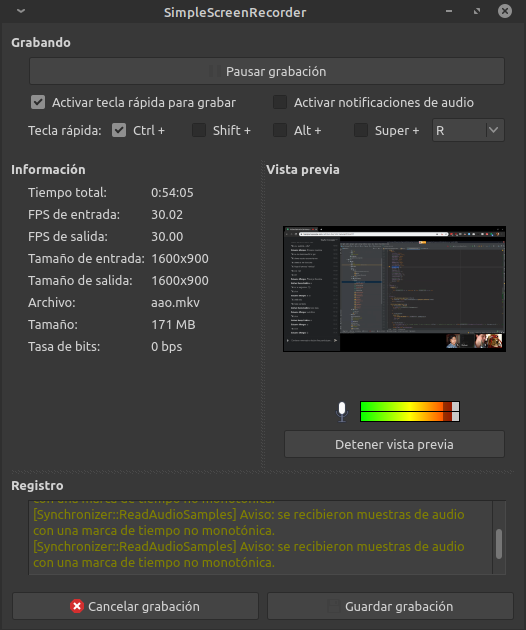 Simple Screen Recorder is, despite its name, an actually feature-rich screen recorder. The name reflects the fact that it is simple to use unlike many other free screen recording applications available. It can be easily configured to start recording from an intuitive wizard-like interface.

It can record the entire screen or part of it directly. The recording can be paused and resumed at any time. Many different file formats and codecs are supported. To perform an X11 recording, all it takes is selecting an area on the root window with the mouse, choosing an output file and pressing record, either by using the mouse or using a hotkey.

It has a Qt-based graphical user interface.

Its complexity becomes apparent in its powerful features. It allows one to record X11 screen areas and fullscreen OpenGL applications including sound supporting both ALSA, PulseAudio, JACK and OSS. It uses libavformat to encode the recorded material into a variety of video formats. Scaling the recorded video is possible as well as configuring the encoding quality for the codec chosen directly from the user interface.

This package contains the main program.

0 resources consuming. what a gem

Its awesome, but it does need a UI Re-Desing, i sujest everthing in a single window, with profiles and stuff

It records very well, but it needs 3 things to be perfect: 1. it must have an option to minimize to tray and to launch already minimized; 2. it should launch on a ready-to-record state, instead of launching on this annoying useless settings windows (generaly, we only set the settings once, and we could change them later in a settings button if we needed to); 3. it should have an option to auto-save a file when finishing recording. Please, consider implementing these features!

Doing its job, but I'd prefer if I didn't have to go through all those settings pages every time I simply want to start recording. The settings should be accessible through a menu if needed, like in most apps.

Perfect for people who dont want to learn too much and still record.

Not sure if this is for me - recordings of longer sessions take up too much space, even GBs per recording.

Very easy to use. Very useful for creating tutorials or for diagnoses of issues....thus an audio-visual aid. Good work.

I installed it and was up an running seconds after that. No learning curve. I decided to move it to a secondary workspace and startefd and stoped the recording with the default shortcut Ctrl-R . That saved me from editing out the start of the video. For my first video I decided to have a separate file for each segment so I could do do-overs, but I am sure that the more confident I get, the more I will start recording smaller videos as a single file, saving me time on the editing. I am using it in an old Pentium i3 netbook and it recorded things properly without any noticeable lose of frames.

I would recommend to use Kullanmanızı tavisiye ediyorum..!

Very easy and fast to use, light and powerfull. I love it! Congratulations to the team!

Absolutely brilliant! It works perfectly and is exactly what I was looking for. Many thanks!